A nook of some sort may have been added to the kitchen to allow for breakfast, lunch, and a quick dinner. But over the last 30 years, those formal dining areas began to shrink and the nooks began to grow. Now, only the largest of homes have dedicated dining areas and the kitchen has become part of the living areas. If the kitchen is the heart of the home, the heart is covering a lot more territory now. 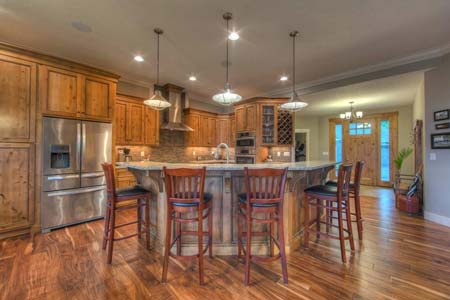 Once, the job of cooking was a solitary one. Today, the act is a communal one, with the kitchen opened up to a living room allowing family members to converse with the cook before dinner is on the table. During parties, appetizers can be placed on out-facing countertops to make for quick presentation and easy cleanup. An open kitchen also creates a much larger area, making the entire area gathering spot. Appliances interfering with one another – such as an open dishwasher door blocking a refrigerator – also becomes a thing of the past.

There are things to consider when building a home with an open-kitchen concept. With one less wall, there’s less room for storage – a kitchen must. Consider adding a pantry to keep dry goods, small kitchen appliances, rarely used pots, and other non-essential things to keep the clutter behind a closed door. By using open shelving, it’s also to get that stuff out when needed.

One less wall also means less counter space, but the addition of a kitchen island can take up the slack there. Larger islands can even feature a small sink, more storage, or even a wine cooler, but still allow the cook to be part of the conversation. The island can also act as the eating area for family meals.

An open concept can even help older home owners “age in place.” If mobility issues become a concern later in life, a larger area is much easier to move around in. One or two less doorways make for fewer obstacles if a homeowner is wheelchair bound.

Of course, there should be some separation between the kitchen and living area – the kitchen is no place for a recliner. Make sure there is a large enough area between the seating area of the living room and the kitchen. A large couch can act as a divider between the two areas without losing sightlines.

Rain Creek Construction has seen the evolution of the open kitchen concept and can help you design the perfect entertaining area in your new home. For more information about building your home with a open kitchen, or any other design ideas you might have, contact us today.